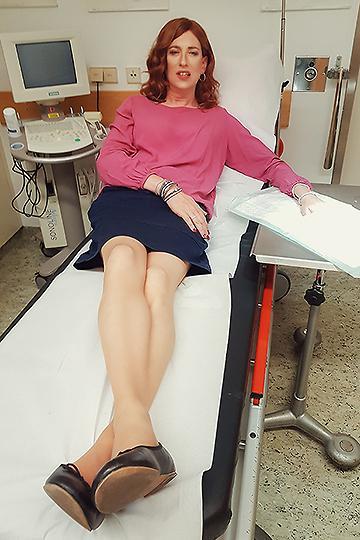 Experience in the emergency room

Yes, it's true - I've had a very stupid thing happening. By a reckless carelessness, I had injured my hand. Since I'm not completely inexperienced in wound care, it was immediately clear to me that the very severe bleeding and deep cut must be treated by a specialist. I did not had a choice, because a simple plaster was completely unsuitable. After the first makeshift bandage blew, I faced a very unexpected, unprepared, involuntary, but certainly nerve-wracking outing. Pretty, dapper and dressed up, I had to introduce myself in the middle of the Bavarian province in the emergency room of the local district hospital by using a health insurance card that shows a guy.

Usually you can avoid unpleasant, critical or dangerous situations by escaping, but in this case it was not possible. The cut had to be sewn, and even if I could have had the red-nosed fingernails removed before treatment, I had not packed any male garments for my expedition into the female world at all. An escape into my male identity was impossible. Fortunately, I have long been far from the lonely, secret, nocturnal excursions and move safely and confident in the world of women. What you can not change anyway, you should take it easy. The employees of the local ambulance had a graceful, unique and special appearance, which they probably will not forget soon.

There I stood, the Femme Fatale with bleeding wound, at the registration and as I already suspected I was first asked for my name and my health insurance card. What should one do in such a situation? My advice is, head up, chest out, and self-consciously go through life. What could possibly happen? I introduced myself, with my feminine name. But I did not have to reveal my health insurance card and my true identity at that time. The question about the card was just to make sure I was insured, to have the card with me and to find out if I was not a lucrative private patient. The beginning was a lot easier than I had imagined.

After a short wait, I was allowed to enter a windowless, functional room flooded with fluorescent light and sober. I was curious to see how people would react to the female copy. Two nurses and a young doctor were waiting there, not knowing what a special lady needed their medical expertise. As expected, I was again asked for my health insurance card and now I had to reveal my true identity irrevocably.

For safety, after the wound care, there was still a tetanus shot. One of the two nurses wanted to give me a horrible and probably extremely painful injection right through my expensive silicone hip pads, into my thigh-hip area, where, of course, it would have had little healing effect. I was already uncomfortable that I had to point out that I consist to a considerable extent of very high quality plastic. Fortunately, in order to visually conceal the anatomical differences between male and female, you do not need padding on all parts of the body, and so the drug found a less compromising pathway into my bloodstream.

As a conclusion of this expendable, unexpected but exciting and exciting adventure, a few interesting findings are recorded. Both my injury and the fact that I face a doctor with my recognizably genetically masculine origin in feminine clothing and presentation were not very exciting and incidental phenomena. The real challenge was an unfounded, indefinable fear of revealing my true identity by showing my insurance card. For all I had to deal with in the hospital, I was naturally Mrs. Springmann and I was very well and kindly cared for. There was no demand and no stupid comments. The worst thing that happened was that a sack of rice had just fallen in China. To my own amazement, my genetic background has not been addressed during my entire visit to the hospital. Of course, I can not judge what the employees were chatting about me behind my back, but I really hope that I left a good, positive impression and that I have also had a good memory of them.

Experience in the emergency room | My blog